For many of us, segregation is associated with the past—particularly the 1950s and 1960s when southern and many non-southern schools went from all-white to mixed race under Supreme Court edicts. Probably not as well known is that since that time, schools in Florida and the rest of the country have been resegregating. Schools, once again, are predominantly serving students of the same race or ethnic background. This is particularly ironic in Florida, one of the most racially mixed states in the country.

These trends toward resegregation are highlighted in a new report issued by the LeRoy Collins Institute at Florida State entitled, Patterns of Resegregation in Florida’s Schools. The report found troubling results in trends chronicling racial diversity in Florida’s K-12 public schools. Most notably, one in five public schools in our state is intensely segregated, meaning enrollment comprises 90-100% non-white students.

Today, more than one-third of Hispanic students and one-third of black students attend an intensely segregated school, and those same students are also more likely to attend school with students living in poverty. This double segregation – by both race and poverty – is common in Florida. Some 83% of low income students are in intensely segregated schools. Intergroup contact is limited, meaning students of color or living in poverty are less likely to be exposed to white, middle-class students, and vice versa. 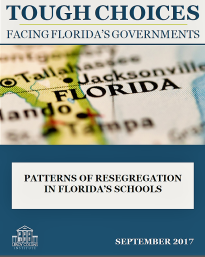 Touch Choices was written by Dr. Gary Orfield and Jongyeon (Joy) Ee. Dr. Orfield is a distinguished research professor of education, law, political science and urban planning at the University of California, Los Angeles (UCLA) and the co-director of The Civil Rights Project at UCLA. Ee is a postdoctoral researcher at The Civil Rights Project at UCLA.

According to the report, blacks and Hispanics are subject to the worst consequences of school segregation, but all our students are suffering. We live in an increasingly diverse society, so it is important for adolescents to learn from and work with classmates from various racial and socioeconomic backgrounds. However, intergroup contact is limited in our K-12 public schools – white students tend to go to predominately white schools, and vice versa for black students. By depriving our children of opportunities to meet students of different backgrounds, we are failing them.

White middle-class student enrollment is especially important. Traditionally those students have access to challenging classes, peer groups and strong support systems. Those resources directly affect the quality of education and impact on success in college and in a career, and students of other races and economic classes are equally deserving of such resources.

Sixty years ago, the U.S. Supreme Court ruled in the landmark Brown v. Board of Education case that “separate educational facilities are inherently unequal.”  At the time, Florida Governor LeRoy Collins bravely upheld the court’s ruling and led the charge in ensuring all Florida students were provided equal opportunities to a quality education.

The report is being issued 60 years after Gov. Collins issued a courageous statement disavowing the legislature’s passage of a resolution, which declared the state was not going to implement the Brown v. Board of Education decision, and calling for the desegregation of the nation’s schools.

Florida’s students will someday lead the next generation, and we should do everything possible to equip these children with the tools they need to succeed. That starts in the classroom. By allowing double segregation to continue for low-income and black or Hispanic students, we are depriving them of a quality education and a chance to succeed in college or in a career.

The opportunity gap is severe – not only in Florida, but in the rest of the country. We have the chance to start an important discussion about the consequences of school segregation, and I encourage policymakers to help ensure all students have equal access to a quality education.

Some findings from the report:

• Nearly 60% of students in Florida public schools are low-income.

• The typical black or Hispanic student attends schools with 68% and 65% low-income students, respectively.

Carol Weissert is the LeRoy Collins Eminent Scholar and Chair of Civic Education and Political Science.

The LeRoy Collins Institute is a nonpartisan, statewide policy organization which studies and promotes creative solutions to key private and public issues facing the people of Florida and the nation. Learn more about the Institute at www.collinsinstitute.fsu.edu