This summer, through the FSU Social Science Scholars Program, I had the opportunity to work as a Social Entrepreneurship and Media Marketing volunteer with an International NGO in Lisbon, Portugal. I worked for an organization called UBELONG which connects people all around the world with high impact volunteering opportunities in developing countries. I was drawn to UBELONG because it is their mission to go where help is wanted, not where the organization believes it is needed. They are firmly against volun-tourism and work with grassroots organizations in developing countries who need and request an international volunteer presence.

UBELONG is an International Volunteer Coordination Organization that uses a bottom-up approach when establishing their volunteer programs. They work with local organizations such as environmental reserves, hospitals, and NGOs that are already established in communities. UBELONG believes that these organizations are in the best position to identify what they need. UBELONG then works with these groups to build up their programs by providing international volunteers. This method of volunteer partnerships is how UBELONG avoids volun-tourism. “Volun-tourism” refers to volunteer organizations that design their programs so that students only gain shallow, self serving, Instagram-worthy, international experiences. For example, students go to Ghana for one week and spend most of their time taking pictures, even as they are surrounded by impoverished children. Volun-tour programs make little to no difference in the community. UBELONG avoids this by ensuring that volunteers are needed where they are going, and that the work they are assigned brings value to the communities.

While working for UBELONG, I was part of a three-person team working in a co-work space in the business district of Lisbon. While there, I was responsible for updating UBELONG’s social media sites including Instagram, Pinterest, and Facebook. I created streams of Facebook and Instagram posts that could be used to market new programs that UBELONG was offering and I revamped their Pinterest account in an effort to reach a broader audience. While at UBELONG, I learned about Search Engine Optimization (SEO) strategies and worked to apply them to all of the organization’s social media platforms. I also worked with the company videographer to film marketing videos about the programs offered in Lisbon, and I worked with the other two women in my office to compile a list of over 350 University contacts (in the US and abroad) that could become potential partners of the organization. Finally, I sat in on company conference calls in which they brainstormed ways to better market their programs, how to compete with similar, larger scale companies, and how to improve the experience for volunteers already in the field.

While in Lisbon, I really had to step out of my comfort zone. This was my first time traveling abroad and I went to Portugal for two months. While there, I was housed in a Hostel in a room with ten other women who just happened to be traveling through the city. This meant that I had no constant roommate and little to no privacy. I had to adapt to living in a confined space out of a suitcase. There were a few other volunteers with UBELONG in Lisbon this summer, but none were there for more than two weeks so I spent most of my trip on my own. During this time, I feel that I developed personally in many ways. First, by being alone, I was forced to confront homesickness head on and I learned to keep myself busy and explore as much of the city as possible. There were also a few times that I got lost wandering through the city and had to rely on instinct and basic Portuguese to get myself home. I learned that I truly can accomplish anything that I put my mind to and can find happiness and value in experiencing a new place on my own. I was disappointed that I didn’t pick up more Portuguese while I was there. UBELONG houses volunteers in a very touristy area of downtown Lisbon, so most of the people who live and work there speak English fluently. Even when I would make the effort to try to speak in Portuguese, people would often smile sympathetically and then start speaking English to me immediately.

All in all, this was a truly amazing experience. By interacting with and living among locals, working behind the scenes for an International NGO, and traveling solo throughout Portugal, I gained a much wider understanding of how different cultures interact and  how connected we are to one another. 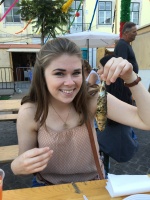 Julianne Weiss is a Social Science Scholar and an undergraduate in the Political Science Department. Here she is  trying Sardines, a traditional food eaten in Lisbon in the month of June when they celebrate their Patron Saint.