In February 2018, 34,000 West Virginia teachers went on strike and shut down every school in the state. The strike lasted nine days and ended when Governor Jim Justice committed to veto all the anti-union legislation and gave teachers a 5% pay raise. The governor also agreed that teachers could form a health care task force to help manage the costs of benefits. The West Virginia strike was just the beginning. Teachers are striking in Oklahoma and Kentucky – and Arizona teachers may join them on the picket line. On April 11, 2018, Arizona teachers staged a statewide “walk-in” before school demanding higher pay and more funding for public education.

Why are teachers striking now?

There are several reasons. First, the competition for funds is fierce and public school teachers are tired of dealing with the financial pinch in the classroom. That’s right. The wave of strikes is about more than teacher pay. Teachers are pushing back against dilapidated schools, outdated teaching materials, and four-day weeks – all of which are a result of reduced funds flowing into public schools. 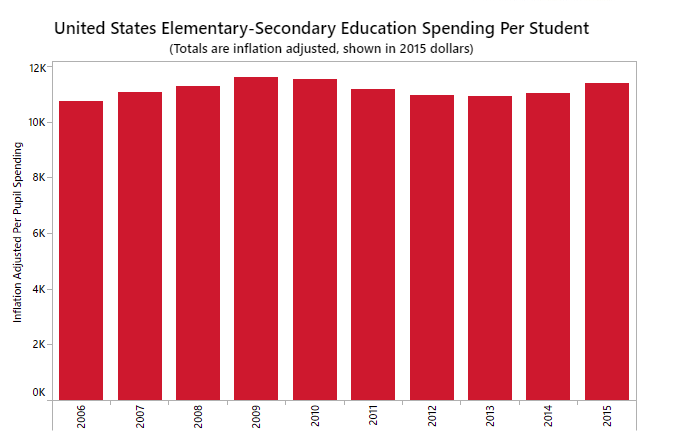 At first glance, the funding situation doesn’t look too bad. The graph above from Governing.com suggests that funding per student has remained pretty stable over time. What the graph doesn’t show is the incredible competition for these funds in an increasingly crowded educational market. This pinch is particularly hard in states that champion charter schools, which also get a piece of the funding pie. In the state of Florida, for instance, you can see a steady growth in the number of charter schools over the last several years. In five years, the state added almost 100 additional charter schools. The point is that teachers are pushing back against the poor conditions of public schools that, in large part, reflect many states’ laissez faire approach to education.

Second, there is a renaissance of protest in the U.S. among citizens writ large. Sure, we’ve seen more protests in America since Donald Trump took office. However, he – nor progressives – get all the credit for citizens taking to the street. Over the last decade we have seen citizens take to state houses and D.C. in droves, including the Tea Party’s dramatic protests across the county in 2007. Protesting, in other words, isn’t a liberal thing. It’s an American thing. It is certainly true that conservatives typically associate protesting with progressivism and, consequently, label their protests “rallies” or “gatherings” instead (I certainly found this in my interviews with Tea Party Movement supporters). This does not negate the fact that Americans are taking their grievances to the streets and making them visible for the world to see.

Third, and related, successful tactics spread. This certainly was true of the lunch counter protests in the 1960s, and it is true now. The teacher strike in West Virginia provided a model of success for teachers in other states. According to an article in Politico, Alberto Morejon, who spearheaded the Oklahoma strike, watched the teachers on TV and decided it was time for Oklahoma teachers to follow suit. Politico reports that Morjon created a Facebook group, which swelled to 30,000 members in three days. Shortly thereafter, the union provided the state a list of demands, including $200 million in educational funding. When their demands weren’t met by the state legislature, the teachers went on strike – just as their West Virginia colleagues had done.

Finally, states are finalizing their budgets for next year now, which means teachers must act now. While state budget requirements vary dramatically, most states approve their budgets between April and June. Therefore, in order to pressure politicians to take their demands seriously, teachers must strike when their work is most appreciated – during the regular school year.

Will teachers in Oklahoma, Kentucky and Arizona win their battles? It is difficult to say if teachers will get some or any of their demands met. Politicians, however, would be wise to note that there isn’t a groundswell of parents calling for teachers to get back in the classroom – and that, in some cases, parents are joining their kids’ teachers on the proverbial picket line. This suggests that a new kind of Parent-Teacher Organization may be in the works – one that politicians’ may find difficult to ignore.

Deana A. Rohlinger is a professor in the Department of Sociology. She studies citizen participation and politics in America.

The featured image is from WSAU.com.