These piece first appeared in Forbes.

Last week, Major League Baseball’s (MLB) Tampa Bay Rays revealed plans for a new ballpark in the Ybor City neighborhood of Tampa. The proposed ballpark has roughly 28,000 seats, a translucent roof, and an $892 million price tag. The Rays owner has suggested that the team will kick in $150 to $400 million, but that still leaves more than half the cost to corporate sponsorships, taxpayers, or other funding sources. Tampa Bay area taxpayers would be wise not to pick up the difference.

The Rays currently play in Tropicana Field in St. Petersburg, just across the bay from Tampa. Tropicana field was completed in 1990 and was built in order to attract a professional baseball team. The plan finally worked when the newly created Tampa Bay Rays began playing there in 1998.

Now—in what’s become standard procedure for professional sports teams these days—the Rays want a new ballpark to help boost attendance and revenue. The team routinely ranks at the bottom of all MLB teams in total attendance, finishing 30th out of 30 from 2012 to 2017. Since 2001 they have never finished higher than 22nd, with the best years being the two following their World Series appearance in 2008. The figure below displays average home game attendance and average attendance as a percentage of stadium capacity since 2001. 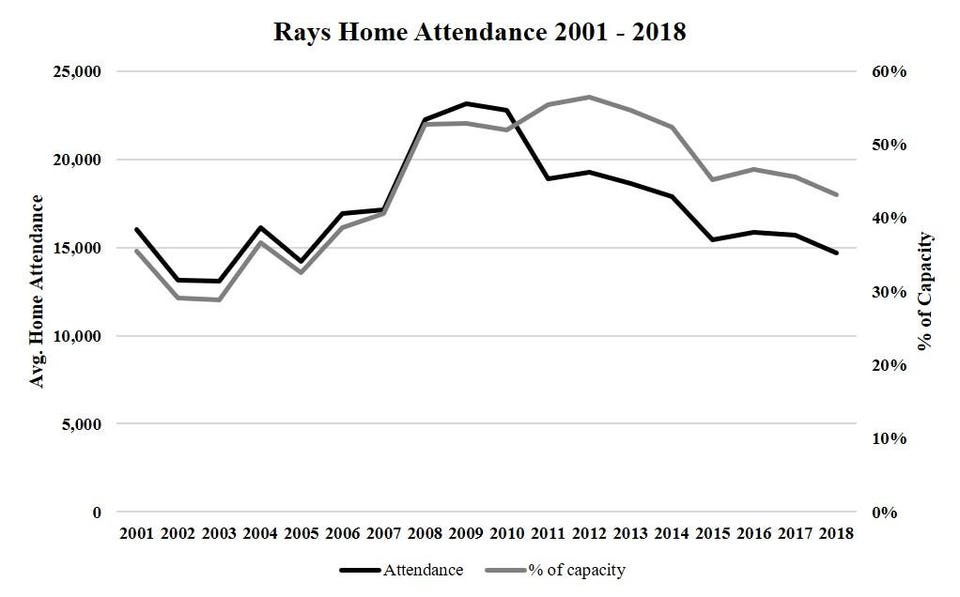 Tropicana field is MLB’s smallest stadium, which has something to do with the Rays’ low ranking in total attendance. But as the graph shows, they regularly fail to fill even half of the stadium’s 34,000 seats. For the fourth year in a row average attendance is below 50% of capacity.

With attendance like this, it’s no surprise that the proposed stadium is even smaller. Some are trying to sell the new stadium idea by calling it baseball’s most “intimate,” but the fact is the team can’t get people in the seats and they know it, hence the downsizing.

To make matters worse, MLB attendance is struggling overall. There have been several explanations for the decline in attendance—unusually bad weather, too many strikeouts, a perceived lack of competitive balance—but no one knows exactly why it’s occurring. This is bad news for any team looking to improve attendance and their bottom line. The drop in MLB attendance also makes it less likely that a new stadium is going to turn things around for the Rays.

Considering the Rays’ attendance struggles and those of MLB in general, there doesn’t appear to be a compelling reason for taxpayers or local businesses to invest in a new stadium. In fact, even in the best of times, taxpayer subsidies for sports stadiums are generally a bad deal for taxpayers . Researchers Michael Farren and Anne Philpot note that:

In spite of the accelerating trend in stadium subsidies, and the support offered for them by private consultants, city officials, and sports fans, the body of academic literature consistently finds they have little to no economic impact. Nor do stadium subsidies pay for themselves via increased tax revenues.

When it comes to stadiums, city officials and taxpayers need to remember that they take up a lot of space that could be used for other, more productive things. The widespread belief that sports stadiums help the local economy is based on an old economic fallacy: Focusing on what we can see rather than on what could have been.

It’s easy to see the people who attend the games and nearby restaurants and bars during the season. But what could have existed had the stadium never been built? Perhaps a corporate headquarters, new walkable mixed-use development, a park, or something else dreamed up by some aspiring entrepreneur.

Furthermore, the Tampa-St. Petersburg metro area is already doing pretty well and probably doesn’t need a baseball team to thrive. As the table below shows, in terms of average employee total compensation growth, private-sector employment growth, and population growth, the area is doing just as well as the other large metro areas in Florida.

In fact, of the four metro areas, Orlando is growing the fastest and has just one professional sports team in the big four sports (baseball, football, basketball and hockey)—the NBA’s Orlando Magic—while Tampa-St. Petersburg currently has three and Miami has four.

In general, there’s no evidence that cities need sports teams to thrive—especially sports teams that are struggling. If Rays ownership wants a new stadium then it should be up to them to find a way to pay for it. Tampa officials and residents, along with taxpayers in surrounding Hillsborough County, should resist the Rays overtures.

Adam A. Millsap is the Assistant Director of the L. Charles Hilton Jr. Center at Florida State University and a Senior Affiliated Scholar at the Mercatus Center at George Mason University.