This piece originally appeared in Forbes.

Politicians and activists have been trying to raise the federal minimum wage for years now. The Fight for $15 crowd is probably the most well-known, but other groups have been pushing for similar increases. One new plan from Rep. Terri Sewell (D-Ala.) and the think tank, Third Way, would tie an area’s federal minimum wage to its cost of living. This plan reduces the negative effects of a nationwide $15 minimum wage but it still has problems.

In a recent commentary in the Wall Street Journal, Sewell correctly notes that a nationwide minimum wage doesn’t make much sense in a big country with a lot of local economic variation. I have explained why here and here, but the general idea is that workers earn higher wages in some areas than others, and a high nationwide minimum wage would be particularly harmful for workers in low-wage areas. For example, the average wage is roughly 26% higher in U.S. metropolitan areas than in non-metro areas, as shown in the figure below. 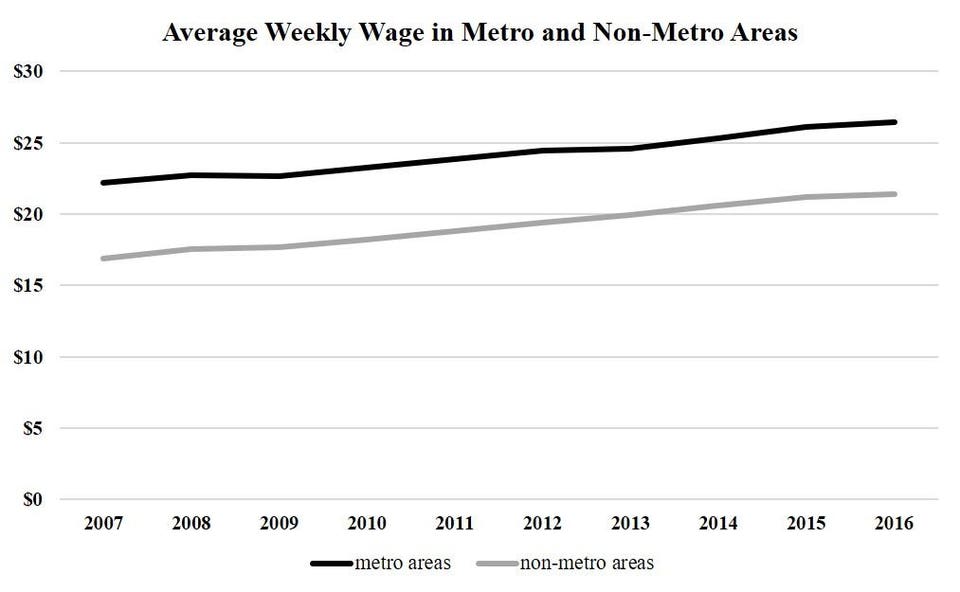 Some firms in both areas may adjust to a higher minimum wage by raising prices or cutting non-wage benefits. Others will eliminate some positions or reduce workers’ hours. Regardless of how they adjust, the adjustments will be larger in low-wage areas more impacted by the minimum wage.

This is better than a nationwide $15 minimum wage, but it still suffers from the same primary problem—it makes it impossible for workers who don’t provide value equivalent to the minimum wage to find a job. Adjusting the minimum wage to local economic conditions may lessen this adverse effect in low wage areas, but implementing a higher threshold in high-cost cities does little to help low-skilled urban workers.

Furthermore, it’s not clear that a federal minimum wage (or other federal policies) should be adjusted upwards in more expensive areas. To see why, we need to think about why an area is expensive.

A figure from Third Way (below) shows that a minimum wage of $10.60, which it uses as a baseline, has more purchasing power in many less-populated inland metro areas than larger coastal metro areas.

These purchasing power discrepancies are due to regional cost differences, driven mostly by housing prices and the cost of services. The table below, also from Third Way, shows prices for select goods and services across three cities.

Two of the goods—juice and bread—are tradeable goods, meaning they don’t have to be produced and consumed in the same area. Such goods are typically produced in a few locations and then shipped throughout the country. As a result, their prices are based on national (and often global) supply and demand conditions, including shipping costs.
Non-tradeable goods and services are produced and consumed in the same location. Examples in the table above are housing (rent), dentist visits, and haircuts. Other examples are restaurant meals, oil changes, and massages.
Since the prices of tradeable goods largely depend on national factors, their prices typically don’t vary much between areas. In the chart above, juice and bread in San Francisco are 12% and 21% more expensive than in Allentown. Some research even finds that the prices of food products are lower in bigger cities once availability, brands, and shopping conditions are taken into account.
Prices of non-tradeable goods, on the other hand, depend on local economic conditions and thus can vary widely across cities. In this example, rent in San Francisco is 165% higher than in Allentown, while dentist visits and haircuts are 38% and 29% more expensive, respectively.
But just because cost differences exist doesn’t mean we should correct for them. For example, two identical houses—one in my hometown of Beavercreek, Ohio and one in La Jolla, California—would have different prices because the house in La Jolla is in a more attractive location thanks to the sunshine, proximity to beaches, mild winters, and all the other amenities that come with living in San Diego. Fully adjusting federal policies to account for the cost difference between the two areas discounts the value of highly desirable, location-specific amenities.
Similarly, there’s a lot of empirical evidence showing that higher-ability workers choose to live in the most productive and expensive cities. Thus, it’s reasonable to believe that the dentists and barbers/hair stylists in places like San Francisco cost more than in Allentown because they are better at their job and provide a higher quality product. The same is likely true for newspaper reporters, which explains the cost difference between newspapers in San Francisco and Allentown.
Before we adjust federal policies for cost differences across areas, we need to consider why some places cost more in the first place.  If it’s because those places offer more opportunities, have better location-specific amenities, or have higher-quality workers who provide better products and services, then adjusting for cost differences gives people in expensive areas a better deal. They no longer pay the full cost of those benefits in the form of lower real incomes.
Now to be fair, a lot of the higher costs in coastal cities are due to land-use regulations that artificially restrict the amount of developable land, which increase real estate prices. But a better way to deal with this issue is to push for policies that make it easier to build rather than try to circumvent it by adjusting incomes via federal policy.
Minimum wage plans that consider local economic conditions are better than those that don’t, but they still make it difficult for the lowest-skilled workers to find jobs. We also shouldn’t be so quick to adjust federal policies just because some places are expensive, since being expensive is a signal that an area has desirable qualities people value.

Adam A. Millsap is the Assistant Director of the L. Charles Hilton Jr. Center at Florida State University and a Senior Affiliated Scholar at the Mercatus Center at George Mason University.
The featured image is from Forbes.