How do you process the tragedy, fear, and anxiety associated with gun violence in the sociology classroom? How can instructors create safe spaces to unpack and analyze shocking events — especially when the gun violence repeatedly occurring in American classrooms undermines the safety of our educational environment writ large?

As social movement theorist James Jasper describes in The Art of Moral Protest, unexpected events that spark outrage — which he terms moral shock — can motivate individuals to take a position and take action, even in the absence of formal connections to a social movement. From a sociological perspective, we can understand the mass shooting at Marjory Stoneman Douglas High School in Parkland, FL as an event triggering moral shock. Since our first lecture together after the shooting, the 67 undergraduate students in my undergraduate Collective Behavior and Social Movements class at Florida State University have been eager to process their emotions and reactions to gun violence in schools, applying the concepts we are covering in class  to make sense of this political moment.

In response, our class developed and has been co-creating a photovoice Tumblr blog, Pictures of Protest, as a medium for documenting and analyzing the development of gun debate social movements in our own “backyard.” Florida State University is located in Tallahassee, FL and is less than a mile from the Florida Capitol Building. Our campus and the greater capital city have been major hubs for advocacy in recent weeks, hosting public vigils, rallies, and protests from all sides of the gun debate.

Using Carolyn Wang and Mary Ann Burris’s photovoice methodology, student participants in this blogging project observe social movement activity, take photographs or videos that capture compelling moments, emotions, and tactics in action, and create captions that synthesize their observations with course material. Our course text, David S. Meyer’s The Politics of Protest, describes common framing strategies of social movement actors, discusses strategies and tactical choice, and unpacks the roles that emotions, symbolism, and identity play in fueling movement development. Through this assignment, students are challenged with the unique opportunity to connect these and other course concepts to ongoing social movement activity in real time. As a bonus, students experience a taste of public sociology by sharing their learnings with their peers, social media networks, and the general public through our blog.

Although students in our class have a variety of political opinions about gun rights, gun control, and education equity, all students are charged to document, analyze, and critique the messaging and tactics used by those they agree with and those they oppose. Some posts are collaborative, completed in groups during in-class activity time, so multiple opinions, perspectives, and critiques are represented within associated captions. Participation in this project is voluntary and students who choose to participate indicate how they would like to be credited in each post.

Engagement in visual-centric blogging introduces students to a popular form of public sociology that develops the sociological imagination. As Lisa Wade and Gwen Sharp, founders of Sociological Images, note, sharing compelling images and social scientific analysis in blog form is an effective way to engage a non-scholar audience in developing understandings of social science principles. Some of our Pictures of Protest posts have been popular among Tumblr’s audience, garnering over 150 likes and reblogs in the course of 24 hours through hashtags alone. Besides garnering social media attention, collaborative blogging affords students a space to reflect and share, linking their own subjective perspectives to the greater gun debate. 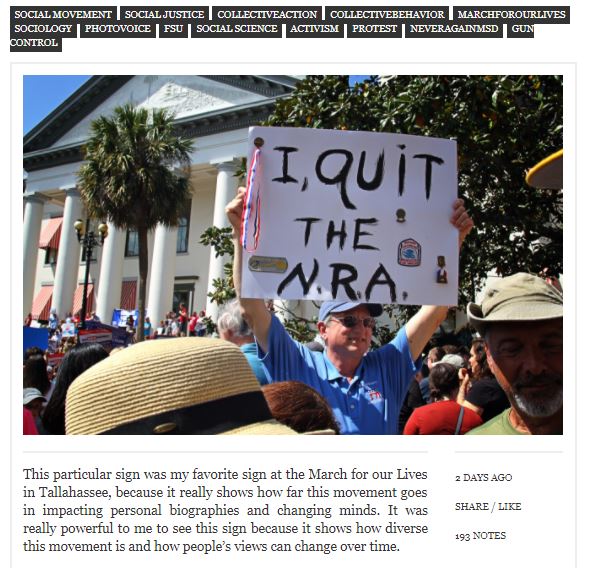 Through photovoice blogging, students have been able to participate, observe, analyze, and reflect  — turning anxieties and fears into hope for change. Students have shared in office hours that this project helped them connect their coursework to current events and to stretch their analytic muscles beyond traditional assignments that only their instructors will review and grade. It has also helped them process their own fears and anxieties about gun violence, especially in the context of educational environments. In the weeks following this event, some students have shared that they are from towns next to Parkland, FL. Others noted that their friends and relatives were survivors of the event. Seniors in class have connected this event to their memories and fears associated with other gun violence events in Florida’s recent history: shooting at Strozier Library on our campus in Fall 2014, last year’s shooting at the Ft. Lauderdale airport, gun violence at a mall in Miami-Dade Country in Spring 2017. While this project sprung out of the need for our students to process tragedy and apply social movement concepts to the current gun debate advocacy surge, I am eager to intentionally incorporate blogging projects in all future courses that I teach.

I am deeply indebted to Haley Gentile, Instructor for the Spring 2017 section of this course at Florida State University, for her development of a social movements photovoice assignment that laid the groundwork for our Pictures of Protest project.

Emily Daina Šaras is a PhD Candidate in sociology, and her research explores education outcome disparities by race and gender.