Mattering to others is a fundamental human motivation. Perceptions that others depend upon us, are interested in us, are concerned with our fate, or experience us as an egoextension have been strongly linked to health and wellbeing. Although an abundance of research shows how mattering is associated with mental health, it is unclear whether these protective effects extend to physical health. Initial findings suggest that they do. These findings center primarily on younger people, making it unclear whether the effects of mattering vary by age. This said, there are reasons to believe that these processes may vary by age, which is a key focus of our present research.

This paper attempts to build on current theoretical and empirical research examining age variations in the biological pathways associated with relationships, and mattering in particular. We employ data from a community-based study conducted in Davidson County, Tennessee (N = 1,026) to examine the relationship between mattering and AL, and whether these effects vary by chronological age. Based on our review of the literature, the analyses that follow will test the hypotheses that mattering will buffer, or condition, the positive relationship between age and AL. This hypothesis is based on the assumption that the positive relationship between age and AL will be greatest among those who possess lower levels of mattering. From this perspective, we anticipate that age-based increases in physiological dysregulation will be most harmful to those who lack meaningful personal ties.

To address these research goals, we employ Poisson regression models that were estimated using data from the Nashville Stress and Health Study (NSAHS). The NSAHS is a community-based study of 1,026 African American and white study participants, aged 22-69, residing in Davidson County, Tennessee.

Our analyses revealed that mattering conditioned or modified the relationship between age and AL (Please see the figure below for a visual depiction of our findings). Specifically, we found that allostatic load increases with age and this increase was significantly greater among those with moderate or low perceptions of mattering to others. This paper adds to a growing body of evidence documenting the role and significance that relationships play in shaping healthy aging. 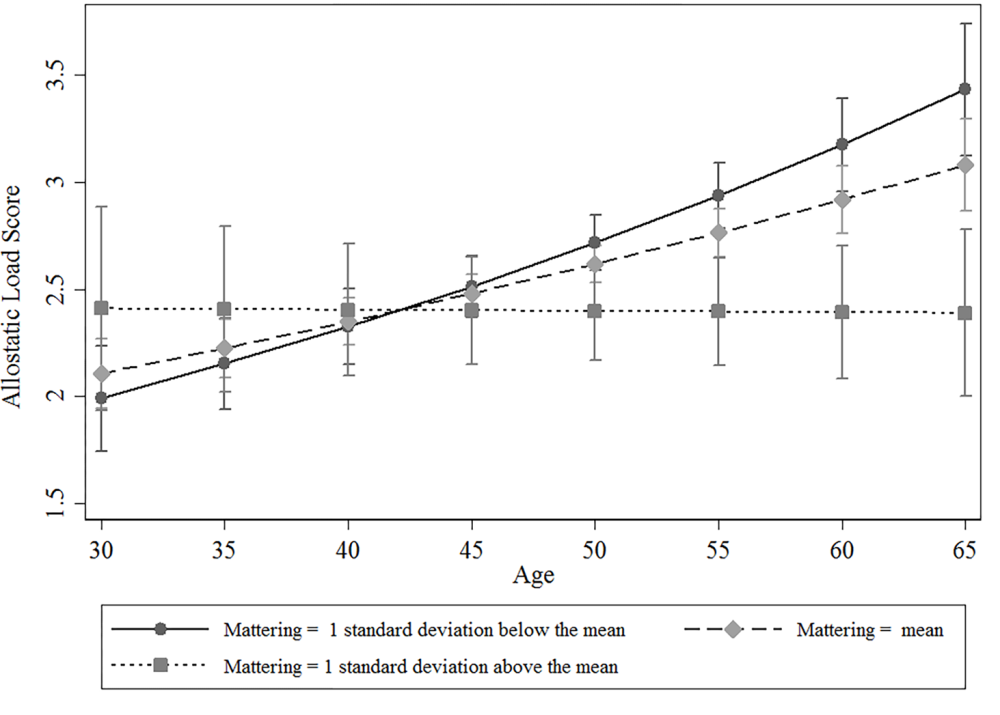 The primary objective of this paper was to test the hypothesis that mattering buffers the relationship between age and allostatic load. Our test of this hypothesis was supported. The significant age by mattering interaction term confirmed that AL increases with age and this increase is significantly greater among those with moderate or low perceptions of mattering to others. Another finding of note was the age crossover, at about age 40, in the mattering by age regression slopes. Although prior research has produced inconsistent findings with respect to age distributions of allostatic load, most show steady increases from early adulthood through late middle age The fact that a similar pattern was observed only among those study participants at mean or below mean levels of mattering suggests two things. First, the protective effects of mattering are less evident at earlier ages. This most likely due to the fact that population differences physiological wear and tear does not emerge until later in life. Second, the extent to which people perceive how much they matter to others is particularly salient as it relates to physical health processes.

The present research adds to a growing base of evidence that suggests positive intimate relationships act as mechanisms that modify biological pathways associated with disease. For instance, social support, a key factor associated with one’s perception of mattering, is associated with regulation of immune function, including inflammation, which is related to a range of chronic conditions including heart disease.

This article appeared in the Journal of Aging and Health and was co-authored with Dr. Michael McFarland and Dr. Dawn Carr (also professors at FSU).

Dr. John Taylor is a professor of Sociology and a research associated in the Center for Demography and Population Health.

The feature image is from Texas Public Radio.